The Rainbow and the PC(USA)

There was a point in time when the Presbyterian Church (USA) was described as “connectional.”  Although some people will continue to use that term out of habit or without some thought, our denomination has voted itself from connectional and into associated.  It is no longer connectional but is now an association of churches by name and similar government.  It has given itself room for a variety of differences between particular churches and even between pastors and their own church’s elders.  In some ways it has established itself as a spectrum, a rainbow.  And for some it has been taken over by a rainbow.

We moved from being connectional because we sought power, first.  We sought to have our own way and how best to demonstrate that we are right.  And this was started by those who first held the power.  Those in power taught those who had a different opinion that it was opinion that mattered most and also that if you were of the wrong opinion you were siding with sin.  So, the solution that was held up as proving both right and sinlessness was the finding of a majority.  In other words, it wasn’t actually about truth.  It was about numbers.  So those of a different opinion from those with the power were taught to gather a majority.

The strategy was simple then.  Beat upon those with the power not with persuasion or belligerence but with shame.  The objective was to shame those with power until their grip would loosen.  “Whom would you turn away?” became the weapon because of the importance of relationship, “Your cousin, your son, the gentle man with the shop on the corner?”  This was not to find or establish truth.  It was to gain power for a new majority based on feelings.  The basis of the new opinion was knowing someone we don’t want turned away.  So the experiential element of our new rainbow is tolerance, now our highest virtue.  Now, we will allow everyone’s opinion to be their guide for the standards by which they will live and we will associate in tolerance.

The connectional reality of the church (universal) lies in the reality and person of Jesus Christ and not in the agreement nor consensus nor the tolerance of differences of any community of people.  Instead, being connectional reflects the systemic experience of nature, God’s order, and requires a deep and seriously intentional and continual conversation between all members of the community.  It is completely different from the conversation we’ve been having, because being connectional is when we seek out the ways in which we need each other.  We do not seek out whether someone is “right” or “wrong” nor “good” or “bad.”  We seek to recognize and then participate in needing, protecting and nurturing each other.  This is because we are of a kind, the essence of kindness.  It requires an enormous amount of work to do this and supremely more than deciding who holds the right opinion or tolerating our differences.

When we come to the place where opinion and mutual tolerance is most important, we are left with a similar structure of governing and an associated relationship.  We live within our own standards and opinions, near but not seeking to discover each other.  So, now we are here.  The hill was taken.  The inherent objectives were achieved.  The wrong battle was fought.

Atheist Reaction to PC(USA) – JT Eberhard
So the Presbyterian Church has said gay people can get married and their love counts.  Cool.  Not that we needed them to say it for it to be so, but still happy to have one less body treating perfectly normal Americans like they had something wrong with them and, thus, were unworthy of love – or that what they called love was really something else.
But take particular note of what the Presbyterian Church has not said and won’t say.  They won’t say, “Huh, I guess god was wrong.”  They also won’t say, “See how god’s will can be altered by popular vote?  So when we were working to keep LGBT people as second class citizens all this time while crediting/blaming god, it could’ve been altered by our opinion/vote at any time.  Surprise!”  At best you’ll hear, “Huh, I guess we interpreted scripture wrong these last few thousand years and that when god wrote that we should kill men who lie with men as with women, what he really meant was that we should give them full and equal rights and not kill them for having sex.  Our bad.  God is a great and perfect communicator, we just bungled it.  Oops.  Thank goodness that god’s perfect, unalterable will and unchanging morality of the church can continue on from here.”
And over the next few years you probably won’t hear, “Sorry we came around so late, and only because popular opinion was turning and we have to monitor our PR – we didn’t make the change based on simple compassion when we had the chance.”  What you will start to hear after a few years is, “We didn’t just come around reluctantly to the idea of gay marriage, we led the way!  Without us fighting for the rights of LGBT people, guided by the love of Jesus, of course, it never would’ve happened.  Gay rights owes so much to Christianity.”  This will be said, of course, ignoring the fact that almost 100% of the opposition to gay rights comes from religious motivation, primarily Christian in the United States.
It may sound like I’m cynical about an organization switching from discriminating against gays to acknowledging that they’re just as human as the straight couple next door.  I’m not.  I’m happy to see one less pillar supporting the house of bigotry.  But that doesn’t mean I’m also not aware of this particular PR script that has been run time and time again by churches throughout history or that I’m fond of spin.  I also wish people would realize that they are the captains of their own moral ships and that they’d stop pretending like they’re following some unmoving moral beacon rather than their own whims.  The fact that they just voted on a moral matter, despite what god supposedly had to say in the bible, confirms the latter.  I just wish they’d admit it.
That might keep this type of thing from taking so long in the future.

Comment left on Eberhard blog – Jtrinity182
I always have a certain degree of appreciation for Christians that decide to liberalize their views, but I often have to wonder what the point is. This is to say that I fully understand fundamentalists. The Bible asserts that it is intended to be read literally as actual truth in a few passages (i.e. 2nd Peter 1:20-21), and literalism requires absolutely zero nuanced thinking. Granted, it does require a sort of mental gymnastics to deal with the cognitive dissonance that undoubtedly arises. Fundamentalists usually chalk that dissonant thinking up to mysteries of the faith or temptation from the devil and move on with their lives. Regardless, the fundamentalist has the security of believing that they have an instruction manual from the creator of the universe and they go about [rather haphazardly] attempting to live out that worldview. Gays are bad. Women are second class citizens. Men rode dinosaurs like the Flintstones. Original sin is real, and Christ is the solution to that particular shitty human origin story.
The Christian Liberal has a much harder task to endure. They believe that there are some truths in the Bible, but, some of the inspired passages are merely there as figurative allegories to be understood contextually or metaphorically. The element of the liberal approach that blows my mind is that it makes NO SENSE.

How did you know?

The couple came through a traumatic betrayal and is renegotiating life.  Everything they thought they knew about each other is up in the air.  Streaming nights of anguished rants cascade into pools of exhausted days.  So, when they come for counseling they have no spark, no direction and little ability to talk. 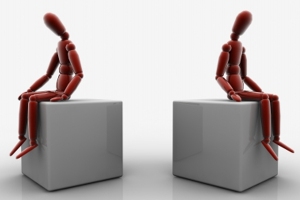 It is in that moment that they hear an alternative that seems like a prescription filled with unpleasant side-effects.  It is the last thing they expect to hear and it sounds like punishment rather than help.  They’re told by their counselor that he has arranged for them to get together with a small group of their friends so they can tell their story.  It is primarily because of their exhaustion that they agree.
So, they go.
There’s no small party atmosphere.  Water is the beverage offered.  There are no snacks.  Their journey to the gathering has moved from hesitancy to stopping on the side of the street to breathe, but they came and discovered the room seemed fuller than they expected.  Four couples arrived before them and have been waiting so when they came in and saw the two empty seats in the living room, they recognized them as if their choices were no longer their own.  So, they sit as if they are slaves. They look down as if they are in front of their superiors.  They fold their legs, arms, hands as if they are naked.
Silence.
A woman, seated on the couch, smiles her usual, gently inviting smile under serious eyes and offers to pray.  Every head bows.  The words are a soft but expectant plea for wisdom, compassion and hope.  The couple is then invited to speak.  The man sobs.  The woman pulls out tissue after tissue to catch her tears.  They both apologize, but neither really explains.  They just tell what happened.  Silence wraps a healing embrace around the room that some recognize.  Then the community speaks with plain words of assurance and appreciation.  Everyone has come across to the couple.  Hands reach out and then they, themselves, are also on their feet receiving hugs, long-lasting, holdings.
A week later, they have received chances to go out to lunch, phone calls that provide immediate vents for frustrations, even simple notes of support with encouragement to keep at it and not to worry and prayers and prayers again and again.  What they discover is that their friends are actually their friends, but that they bring a depth of resource that was unexpected and clearly was the voice of Jesus.

“How did you know that these people would do this,” they ask the counselor the next time they get together.  “This is what believers do,” he said.