NYNY, Islam, Justice League and Thanks

Listening to TLC’s version of Sleighride, sitting in a Starbucks because it is the only coffee place open within a couple of blocks and fresh out of a late night showing of “Justice League” in the Regal on 42nd Street in NYC.  Realizing that this isn’t the regular placement of a Senior Pastor of pretty much any First Presbyterian Church. Seems characteristic, however, to what works for me and the nature of this occasional blog.  We came north to the city to have Thanksgiving with family.  New York, NY is a marvel that should be credited as such, as should the new superhero movie from DC and that Sleighride had its reins released by the ladies. 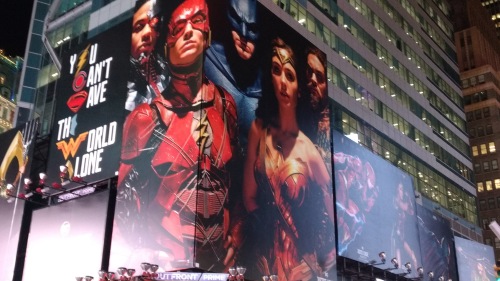 Wrapped up Thanksgiving by dropping into the theater we were passing to see what they had done with these favorite characters in their new story.  Sent on my wife and sister-in-law because they had no interest in staying up that late… or seeing costumed myth come to life.  All told it was a really fine way to finish the day.

The movie is about the gathering of reps of various populations of earth to fight a common enemy. It is SO much better than the earliest reviews suggested.  And, it put me in mind of holding a Thanksgiving Eve service with our local Muslim community on Wednesday night. Clergy and church members from different churches came to the Islamic Community Center to celebrate together. That kind of connection – reps from various populations of earth gathering to fight a common enemy – between myth and reality is something more people should talk over.  There’s a marvel within that.

As I am the President of the Downtown Ministerium this year, I was asked to consider including the Islamic community in our Thanksgiving Eve service.  So, I reached out to the leaders in our area and brought a version of worship that might be used. It included language I knew I could say authentically and that I hoped would not offend and, in fact, would include these neighbors.  Turned out, it fit for them as well.  So, we went forward with the proposed battle plan.  The common enemy is hate, but hate’s comrades are prejudice, neglect, misinformation… a crowd.  As I watched Batman in the movie working his way into the lives of people who didn’t see why they should associate immediately, I felt for him.  The tone of the conversation was recognizable.

The thing about this gathering was that we had to acknowledge the truth of personal understanding, faith, history and differences.  The value of differences is crucial because I’m not going to water down the Gospel of Jesus anymore than the followers of Islam are going to stop praying at the correct hours.  Batman has a goal but he has to learn each of the people before he can gather them in.  He must step into risk as well in order to find the resources he needs for the entire team.

It all works because the people are willing to come together and to act as themselves, not by giving up their identities but by combining their efforts.  So, on Wednesday night we all gathered alongside each other and admitted we all needed to say thanks. It was not earth shaking but it had the strength of light in the darkness… which is a marvel indeed.  We simply said, as neighbors, that we won’t fight, deride or even challenge.  No one claimed to be right or that others were wrong.  Instead, we admitted our shared humanity and that we can only accomplish life with help and that requires an expression of gratitude.  And then we ate pie together.  It’s amazing how strong light can be.
“Be merciful, just as your Father is merciful.” Matthew 6:36